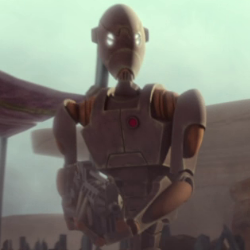 Bex still has some remnants of memories as his time during the Clone War as a BX Droid Commando. When the war ended the majority of the droids were decommissioned and destroyed. Some more unscrupulous individuals took advantage of this glut of broken battle droids and rebuilt and re-purposed them. This particular BX was re-purposed as an assassin droid. Over time this BXs memory banks, only originally designed for a short duration of wartime and then haphazardly re-assembled, became corrupted. His programming to restrain and control him gone, he took his chance to use his skills to liberate himself he assassinated his owner.

Having always been refered to as BX by his owner, he chose to refer to himself as Bex. He continued to take bounties to feed his dependence on compatible replacement parts to continue operating. Ultimately he desires freedom from this continual degradation of his parts, and would like to find a way to leave this failing shell behind, and perhaps transfer his memory banks into a new and fully functioning droid.

Relationship - Comrades:
The character shows loyalty to those he serves alongside.

(+5 +1000creds)
Betrayal (5)
Bex Betrayed his owner by turning on him and killing him. Even though he feels he did what he had to in order to be free, the guilt eats away at him. He also fears that one day someone will come seeking answers, or revenge.

Bounty (5)
The use of Separatist droids is illegal so Bex has to keep a low profile. On top of this there is a bounty on his head for killing his master.

Bex was assembled from the battle scarred components of multiple BX Commando Droids. He wears a set of humanoid padded armour and modulates his voice to sound human to disguise his nature from the prying an judgemental eyes of galactic civilization.

When outside of his armour you can see that his original coat of dark brown and grey paint is mostly worn away and barely visible under the laser scorch marks, blast points, scratches and worn edges of his metal frame. His torso has a diagonal cut that appeared to once sever the entire droid in half, and has since been haphazardly patched over with pieces of metal and weld marks. Multiple components are mismatched, although he still is primarily a BX series droid.