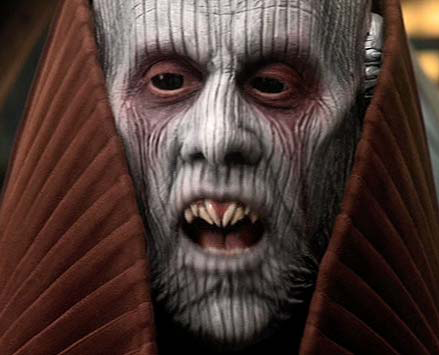 Valem Sabir always intuitively knew the right things to say, in his dealings with others. For many years, he operated a curiosity shop from the depths of Pau City, far beneath the windswept surface. There, he fell in love with the lost lore of the Jedi, and other traditions found in the old tomes he had inherited with the store. When an actual Jedi Master visited Utapau, news of the visitor trickled down to his sensitive ears, despite the low profile she was trying to keep. Jedi Master Tu-Anh seemed distracted when he contrived a brief introduction, but she cocked her head and offered him a smile, saying he should visit the Temple Library on Coruscant.

She had been immune to his wiles, but friendly, nonetheless. It saddened him to learn of her murder just days after they'd met. When the other Jedi arrived on his home planet, he kept to himself, desiring no part in whatever intrigue had led to her demise. Valem did, however, decide that it was time to move on from Utapau; and that life was too short, even for a Pau-an, not to act upon such an invitation.

The journey to the Core was unlike anything Val had ever experienced, and the city-planet of Coruscant itself was overwhelming, in a delightful way! He was welcomed at the Jedi Temple, and quickly found himself assisting Jocasta Nu, the Chief Librarian. She recognized his force sensitivity, and told him to be patient- that she herself had been a late-bloomer, and that she sensed a strength in him. She had even begun instructing him in a lightsaber technique that utilized his strengths, while downplaying his physical weaknesses. They were together in the library, when darkness fell on the Jedi Temple. They escaped the destruction of that day, and continued in hiding during the early stages of the Jedi Purge. Working in secrecy, they gathered and preserved all they could of the Jedi legacy...

Until one day, Darth Vader turned up again- this time with a Pau-an at his side! It would seem that their efforts had not gone unnoticed. In his flight, he was separated from the Librarian, and fears the worst. He fled to the depths of Coruscant, which were in some ways like his home city had been, beneath the surface of Utapau.

In the subsequent years, Val has opened another curiosity shop, and watched the rise of the Empire from below. Hiding in plain sight, just another ex-pat Pau-an from the exodus following the Clone Wars, trying to get by on a new world. He was starting to hear rumors of dissent, and felt foolish for hoping they were true. Hoping to be a part of it. A voice of resistance. An armchair rebel. He might never get the chance.

On his way out after closing the shop one night, a figure in black accosted him, giving him no time to react. That is the last thing he remembers, as consciousness slowly, groggily returns...

Seeks further understanding of the Force, its practitioners, and their items of power.

Standing over 2 meters in height, Val's gaunt frame and sunken features are hardly inconspicuous. Rather than attempting to conceal his appearance, he relies upon his gaudy apparel to convey the obvious message that he has no reason to hide.

Which seemed to work, until the man in black showed up...