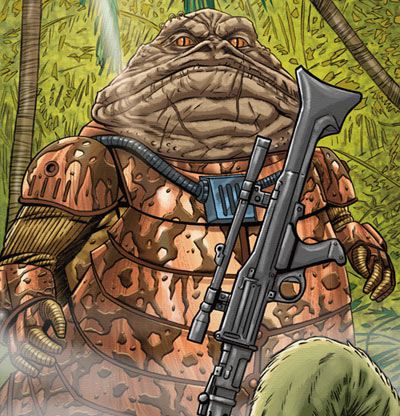 Code: Always Get Paid
A bounty hunter who doesn;t get paid doesn't eat, and starving while maintaining a terrifying reputation is still starving. This character's principles are primarily economic, and consist of tenets such as always working for the highest bidder, never taking on jobs out of sentiment, and accepting no payment besides cold, hard credits.

Family (5) - Belongs to a minor Hutt tribe, currently in an internal conflict. After Golan gained some notoriety as a bounty hunter, both sides have been looking to recruit him to assist them in winning the war.

Fame (5) - A Hutt bounty hunter is not a common sight. Its rare enough in Hutt controlled space, but outside of their own territory, it is an almost unheard of. After completing high visibility take down of his own cousin operating out of Ryloth, word has started to spread of a new player in the hunting game.

Shorter and lither than most normal Hutts, Golan still carries a hefty bulk in his slug like body.