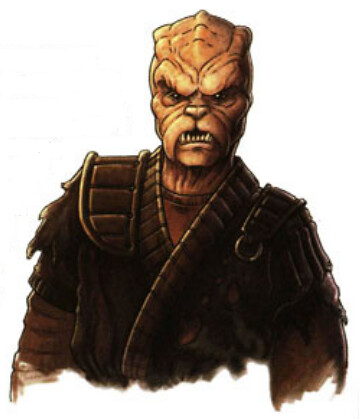 Ancient religion - Jebal was born on klatooine in huttspace in 35 bby, as a young child he was put into Hutt slavery and made to serve under a Hituro The Hutt of the Desilijic Hutt Family.
Being was trained to be a bodyguard and thug for the Hutt, he was brainwashed and taught from a young age with others as part of the hutts scheme to shape un-bribable, singleminded protectors. During his youth his trainers saw he had an affinity for light weapons, being able to handle small arms better than melee and heavier weapon’s. He also had an almost extraordinary perception to find see others around him, hidden or even technologically made invisible, which would prove useful to protect the hutt when he completes his training.

In 24 BBY at the age of 11 a Jedi has made the hutt’s acquaintance when he was investigating assassination threats on a senator, all of which pointed to this hutt, while in his hospitality he sensed the force in one of the hutts servers, a small klantoonian. After inquiring about the boy he found his name to be Jebaal To’kar and he has been a slave to the hutt since he was 3. During his stay Jebaal was made to keep an eye on the Jedi, he was loyal to the hutt and would tell him if the Jedi was doing anything on the shadier side, and they grew acquainted through a few conversations, during which he found out who the Jedi were and what they did. At the end of the Jedi’s stay he had come up with nothing but curiously wanted to buy the slave, after being scorned by the hutt for his assumed use of the slave he passed a small fortunes worth of credits into the hutts hands, and the boy was told he had a new master, Jedi Knight Bru’lich Draey. On the way back to coruscant Master Draey had told Jebaal the real reason why he had been bought, he told him he was force sensitive and he had freed him so he could join the Jedi order to hone his force skills.
When he got to coruscant he was brought into the Jedi order, he was assigned master after master but Jebaal was difficult, citing Master Draey as having bought him and he was to be his teacher, which was not approved of until Draey had heard about it himself and offered to teach the pupil seeing as he had no padawans of his own, but in addition to learning under him Jebaal would have to learn with the younglings having been a lot older when he was brought into the order and not learned in the most basic ways of the force.
Jebaal did not like the Jedi training, he couldn’t grasp it like the younglings could, lightsaber training, meditating and especially with manipulating the force like others, if it were his choice he would have left but he stayed loyal to Draey as his padawan and kept learning.
Only after 2 years of learning, at the age of 13, disaster struck, the beginning of the clone wars! Master draey was made into a Jedi general and Jebaal was to serve under him and command troops.
Over the 3 years of the clone wars Jebaal has become a veteran of many battles and has acquired a lot of equipment for these battles, looking like less of a Jedi and more of a mercenary with a lightsaber. Curiously he still wielded the pistol he had been given when he was a hutt server being able to use it better than he had a lightsaber.
In the battle of coruscant he lost his master and his lightsaber while defending their venator from droid boarding parties.

Oath - departed - taking after his late master Bru’lich Draey, Jebaal made a promise to his master and seeks galactic peace for the republic, the only way he knows this is by subjugating the CIS into peace talks, though as the clone wars drags into the 3rd year it seems more and more unlikely as the CIS fights back to a stalemate

Emotional strength - Bravery - Jebaal has shown courage in his numerous battles under his master, he is not scared to dive into combat or get hurt

Emotional weakness - Recklessness - his bravery can easily be seen as recklessness as he will throw himself into combat at the first sign of it, wether he is wounded or unprepared to protect and help

Jebaal is a slim athletic-looking klantooian, short by other klatooians he stands at 5’7, he has a few warscars from his battles, which he refuses to cover with synthskin because of personal reasons, including burn scars all other his torso and a slash scar from his left shoulder down to his lower back, he is also quite the looker should you be attracted to the canine species.
He looks like a Jedi only because of his robes, as he has acquired many other items for himself over the years because of the clone wars and his knowing of life outside the order, and while drawing many eyes of disapproval, jebaal does not care. Under his robes he has a simple brown trousers and a white shirt over which he wears a catchvest for combat situations, with heavy boots. He also wears a blaster pistol on his person, usually in a hip holster or chest holster for quick access. He looks more like a privateer than a Jedi.

For credits, 1000 extra at start, spent 300 hundred on a catch vest, 550 on a model 80 blaster pistol altogether 850 spent on weapons and armour.
100 overall on a handheld commlink and 3 stimpacks.
500 on a custom grip for his pistol. Leaving him with 50 at start of play

Jebaal doesn’t talk about his past, though no one other than his master has every asked into it, everyone else has turned their noses up at him which has made him feel like he doesn’t belonging.

20 xp gained, 15 spent on a rank of grit, perception and survival respectively, saving 5