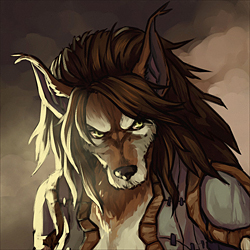 Dutybound (10) - Vaska serves with the shistavanen security council on Uvena Prime, tracking criminals or interlopers in the Uvena system through data networks even as others track them through space. A lead to something big that could threaten not only Uvena but the galaxy at large has led her to Coruscant and it is her duty to get to the bottom of it.

Bounty (10) - Vaska's efforts on Uvena were instrumental in thwarting the smuggling efforts of crimelord Tuvis Dahl and his syndicate, who were covertly stealing resources from the shistavanen homeworld. It also led to the dismantling of the Dahl Syndicate's operations on Eriadu after she sold vital information she gained during the investigation to officials there. Though the syndicate was powerless to seek retribution while Vaska was on her homeworld, they haven't forgotten. Should they learn she's off world on Coruscant, they will be looking for her.