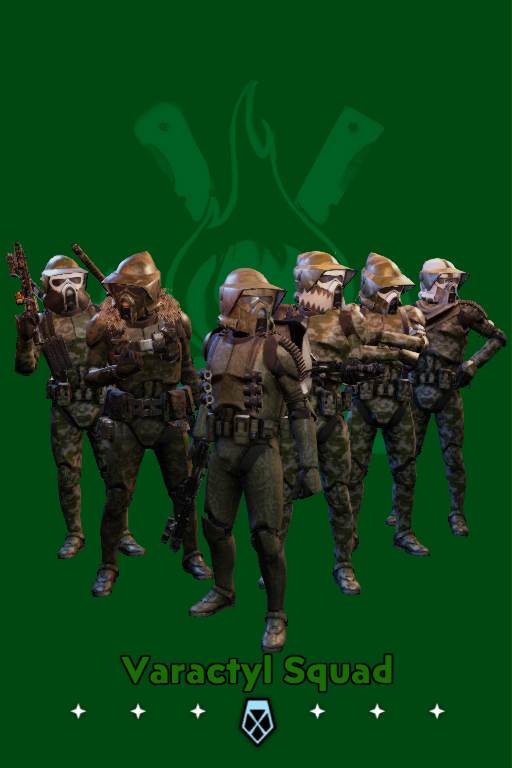 CT-5821 Fury:
Fury's helmet is painted as a stylized wolf head. He is the team's comm operator. He is one of three survivors of Ignition Squad.

CT-5825 Havoc:
Smokes at every available opportunity, very combat capable. He is one of three survivors of Ignition Squad.

CT-5818 Hawk:
Enjoys providing "close air support" from his jetpack, hence the name. He is one of three survivors of Ignition Squad.

CT-5826 Anakkona:
Selected his name from the predatory snake that lives on the forest floors of Kashyyyk. He is skilled at stealth and is often the trooper of choice for silently dispatching sentries. Paints a stylized Anakkona coiled around on his torso and helmet, the head sneaking around from the bottom and back of his helmet around the left and up towards his visor. He is the only survivor of Venomblade Squad other than Camouflage.

CT-5805 Ghost:
Called Ghost because he has had many, many close calls. During the First Battle of Geonosis, he was nearly their first casualty three times. Being light-footed only reinforced his name. He is one of two survivors of Preystalker Squad.

CT-5809 Shadow:
Named for his stealth skills and the enjoyment he gets out of walking behind someone unnoticed. He typically colors his armor a couple shades darker than the others. He is one of two survivors of Preystalker Squad.

Their first deployment was the Battle of Geonosis. They were put under the command of Camouflage and managed to make it through unscathed, one of an excessively small number of units that hadn't lost a man. That wasn't for lack of action, though. They saw plenty during that battle. After that, the Devaronian Jedi Sei Vanta saw how well they worked together, and managed to pull strings and get them assigned to her. They were to operate as a surgical strike team, sent in ahead of an invasion force to strike a few key positions, then fall back to rejoin the invasion force. They had one successful operation under Master Vanta, hitting a few sites on Atraken in advance of the invasion there, again sustaining no casualties. Then they were quickly shuffled off to Akiva, where it all went wrong.
Varactyl Platoon was formed into four squads, named after the different sub-species of Varactyl: Venomblade, Deathspine, Preystalker, and (because they refused to be known as "Dwarf") Ignition squads.
Varactyl Squad was formed from the remnants of Varactyl Platoon after a devastating mission to Akiva that resulted in the death of their Jedi and an 80% casualty rate.

They all wear Phase I ARF trooper armor, and on some missions they also use jetpacks. Their armor has a camouflage pattern, repainted as necessary for the anticipated environment of their next mission. On the front of their helmet's ridge, they have a pattern mimicking Jorin's forehead tattoos, and a pattern mimicking his cheekbone tattoos on their shoulder plates.

In the picture, their appearance is merely an approximation of their armor. I can't get it perfect because of the natural limitations of the XCOM2 mod.
From left to right: Ghost, Shadow, Anakkona, Fury, Hawk, Havoc.