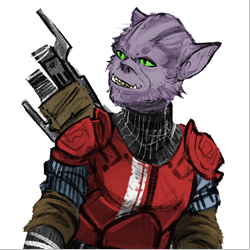 Moda Li Kendett is a bounty hunter doing her best to avoid Imperial entanglement. Being one of the only few lasats to survive their genocide, Moda uses her skills as a warrior to skirt from planet to planet, taking whatever jobs necessary to survive. Those jobs usually involve the capture or execution of unfavourable people, whether they did wrong by her eyes or not. Growing up on Lasan, she learned the ways of the warriors, and strives to uphold her values of honour and honesty.

Ambition - Moda spends nearly every day believing she's the only lasat alive. Along her travels, she keeps her ear to the ground, searching for any sign of others of her species.

Revenge - Moda takes every opportunity she can to take out her rage on the Empire. While she won't do anything overtly stupid, it won't stop her from making excuses.

Criminal - 10
The Empire's invasion of Lasan was not without retaliation. Many Lasat fought back against the invading forces, though to little effect. Moda was one of the lucky few who survived and managed to escape, but her body count during the battle was impressive. Because of this, she became well known among the Empire, and a fair few would like nothing more than to see her behind bars or with a hole in her head.

Flashbacks - 5
Moda frequently deals with morbid, vivid flashbacks of the resistance on Lasan. Her mind is damaged, possibly irrecoverably so, after witnessing firsthand the effects of the Empire's use of the T7 Ion disruptors on her friends. When she experiences flashbacks, she often becomes a mumbling mess incapable of doing anything but reliving those moments. Occasionally, she takes sudden and violent action against anybody nearby, believing them to be stormtroopers.

Moda stands at 7'2" tall and is covered in short, grey-purple fur. Her eyes are a bright, almost glowing green colour and are usually kept narrow, though they can expand to be almost perfectly circular in certain conditions. She stands with a noticeable slouch, her neck hunched forward and her shoulders broad.