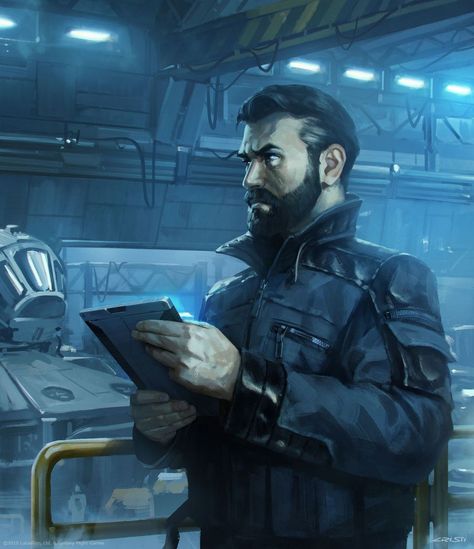 Gar was one of the lucky ones on Corellia; he was able to provide himself a good enough education that he could get out of there and see a bit of the galaxy. He started out in CorSec where he trained in computer security, but the hierarchical system proved to be a bit restrictive for him, so he left by *mutual consent* still in his early twenties.

He found work in various endeavours of semi-legal status, but was always very wary of falling too far towards the illegal side of things. After a while he found steady work as a kind of private detective, using his computer skills to unearth whatever his clients might need. He tended to work the Outer Rim, moving around as much as he could so that he wouldn't come to the attention of either the local security organisation or organised crime. The problem with constantly moving was that it was difficult to build a reputation, but somehow the clients kept trickling in, enough to keep him in business anyway.

About a standard year ago he was approached by an unusual client, a woman named Hela Cordes. She wanted him to get her the cargo manifests for a collection of seemingly unrelated freighters, and whatever he could find about their current whereabouts. She didn't give any information about herself, but he made a habit of background checking all of his clients and he discovered she was from a fairly wealthy family on, of all places, Alderaan. Gar had travelled a good portion of the galaxy, but he had never had cause to stop on Alderaan; it just wasn't the kind of place that *needed* the services of a guy like him. It was a planet of artists and idealists, and Hela Cordes didn't seem at all out-of-the-ordinary for the planet, so what did she want with this information?

This was a mystery which intrigued him, but he knew enough that he couldn't dig too deep on a client; a simple background check to make sure he wasn't going to get into trouble with a Hutt or a security bureau and that was it. So he tracked down the information that she wanted, packaged it up and sent her a message to let her know it was ready for retrieval. But she didn't get back to him. He was in the habit of taking on several jobs at once so he didn't have lots of time to go looking for her, but two standard months later she still hadn't retrieved the data. Which meant he hadn't been paid.

This was about the time when he started to investigate Hela Cordes in vain. His searches of media on Alderaan had her name popping up semi-regularly in gossip 'casts right up until just after she had contacted him, and then nothing. No more mentions. There was nothing suggesting anything untoward had happened, there was just nothing at all.

Gar hopped a shuttle to Alderaan, promising his current clients that he would be back quickly and get them the data that they wanted, but his optimism proved unfounded. None of her contacts seemed concerned by her absence, but none had a good explanation for it. He managed to hack the Alderaan Security database and found that they had no reports of foul play and so there was no investigation underway. She had just vanished.

It was only by luck that he discovered that one of the freighters she had asked about had landed on the planet at about the time that she disappeared. He sliced the flightplan and discovered that it had gone on to Coruscant, and so he followed, the fact that he still had clients waiting for him completely forgotten.

Quest - Purpose; find out what happened to the lady who hired him, Hela Cordes.

Gar has been told that he doesn't look like a slicer, which is a plus in his book. He has the frame of a manual worker and thick black hair which he styles to fit in to the planet he finds himself on, all the better to blend in. His dark eyes find little mirth in anything they see, and the wrinkles on his face tend more towards the frown- than laughter-lines.

Serious, intelligent and dogged when he finds a mystery, Gar has discovered that he has a talent for investigation. As long as he doesn't actually have to talk to people, that is.