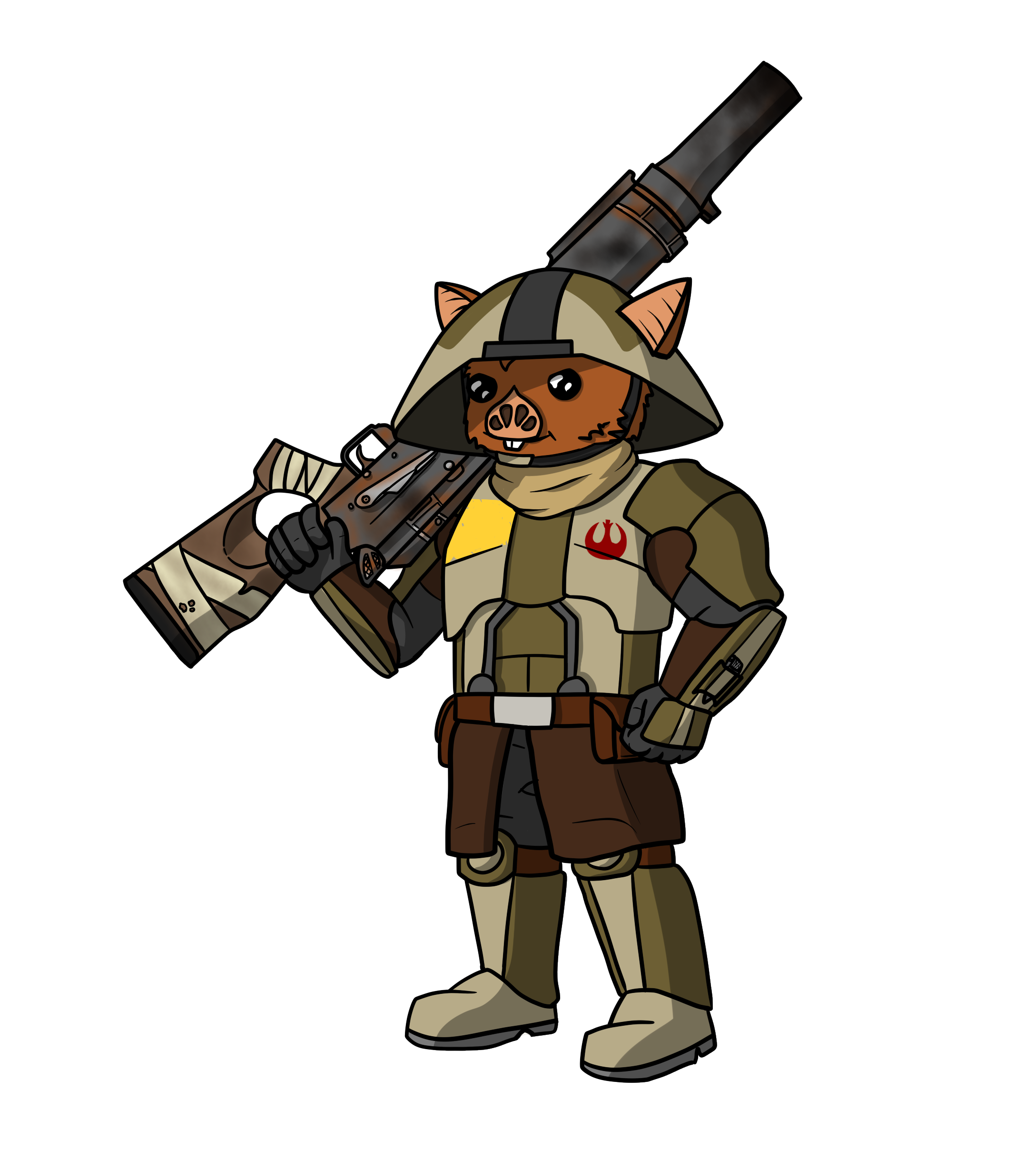 Chubbo's Universal Wireless Lightswitch!(TM) (4 Encumbrance)
(Patent refused by the Imperial Patent Office for being too dangerous a technology)
As a Maneuver, may immediately deactivate the primary power generator of a station, ship, or building he is in. If there is a backup power generator, it will not be affected. If the target is connected to a power grid, the building is simply cut off from the power source.

He was a born mechanic and tinkerer and loved to take apart devices and put them back together, though they often did something different then they used to. He grew up with Jorn, a Kel Dor who shared his love of tech. They got into all sorts of trouble together, largely at the behest of Chubbo, as Jorn would grumble about the dangers and risks involved, but go along anyway to make sure Chubbo didn't get himself electrocuted or something.

When Chubbo was still quite young, the Clone Wars broke out and his home planet became a battle ground. His mother and Jorn's parents were killed in the initial assault, so his father took them off-planet aboard a refugee ship bound for the refugee relocation center on Abregado-rae.

While en route, the ship was raided by slavers who took Jorn and Chubbo along with many other refugees to their base in the Belgaroth asteroid field. Once they were put in the cell and the pirates had left, Chubbo unlocked the cell door and left. He urged Jorn to come along with him, but Jorn refused, saying that it was too dangerous. Chubbo decided to go anyway, and climbed through the ventilation until he reached the reactor level. Once there, he scrounged around for bits and pieces to build his latest idea: a universal, wireless lightswitch! It took him a good few hours to construct it, but then he needed just one more part. The problem was that that part was a key component of the station's power system. Oh well. He pulled out the part and plugged it into his device, shutting out power to the entire station. After a couple minutes, the system re-routed past the missing part, restoring the power.

As he climbed back through the ventilation to get back to Jorn, he encountered two Mandalorians who had been releasing the prisoners and had rescued Jorn. He demonstrated his lightswitch, which worked perfectly, though it needed some extra insulation and zapped his paw. Some pirates came down to check the disturbance, but after a short fight, the Mandalorians took them all out.

He was reunited with his father on Abregado-rae, and a short time later began an apprenticeship with a mechanic on Vorpa'ya at the recommendation of one of his rescuers.

Once he had completed his apprenticeship and came of age, he and Jorn struck out on their own, starting a business on Lok. After a couple years, there was a violent uprising started by a young Mandalorian and a couple of his friends that drove the Imperials off of Lok. Chubbo and Jorn decided to join the Rebel Alliance, where they would make use of their tinkering skills to aid an independent commando group. Chubbo became the group's sniper, using his small stature and steady hands to his advantage.

Improvement: Makeshift
Chubbo is a great tinkerer, and loves to build things out of the random odds and ends he has laying around. He's never more happy then when he is sitting on the floor, surrounded by disassembled gizmos and random odds and ends.
Improvement: Lethality
Chubbo is always tinkering with his gear to make just that much better. Just a bit more accurate, just a bit more deadly.

-5=1,500 credits
Sabotage: With his intimate knowledge of technology, he can cause an obscene amount of damage to Imperial locations using just his rifle. He can target seemingly insignificant components and shut down entire bases.