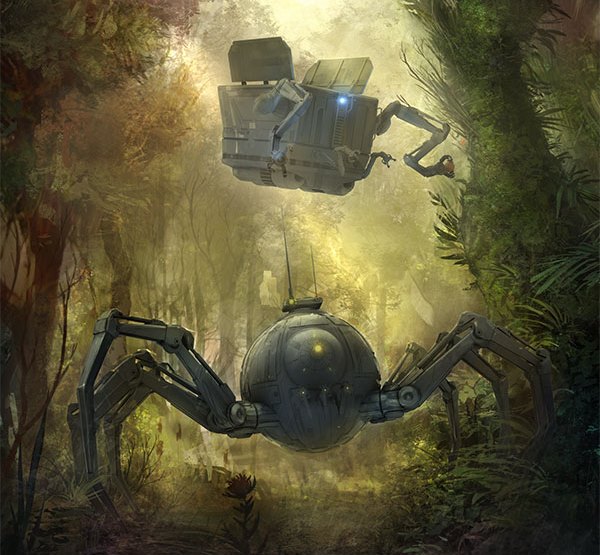 Astrid set aside portions of her stipend from Zando Inc, in order to purchase this scout droid for her own personal (and professional) use.

"Spidey" was programmed with the instincts of a hunter, and despite requiring no sustenance (and having no organs to consume, process, etc.), has been known to stalk small animals, pounce, and toy with them.

She has been made to understand that small/ young sentient/ sapient species are strictly off-limits (unless otherwise directed by Astrid).

Likewise, her Stun capabilities are used only when directed by Astrid, or in self-defense. If Astrid, or those perceived as her allies, are in danger, SPY-D sometimes takes the initiative to act on her own (if she's not off tormenting some poor animal).

SPY-D has been Dr. Andunie's companion for several years, and tends to do her own thing, until called upon. She reluctantly complies with directives from Astrid, and mostly ignores anyone else trying to communicate with her.

While capable of communicating in Binary, SPY-D understands Basic, and communicates with Astrid via her comlink and datapad.

The Wanderer Scout Surveyor is a roughly human sized droid with a spherical body and six spidery legs. Its design allows for remarkable speed and agility, enabling it to track targets and incapacitate them with a powerful stun blaster.

Droid does not need to breathe, eat, or drink, and can survive indefinitely underwater or in vacuum. Immune to poisons and toxins.