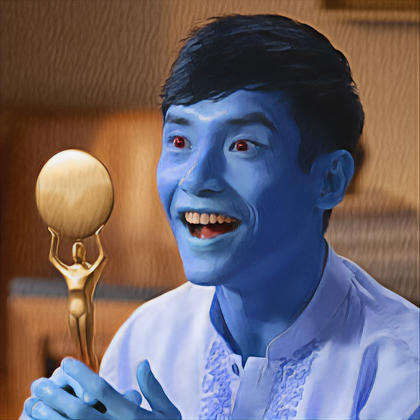 Infravision: Remove up to 1 setback dice from checks due to lighting conditions.

Zaff Blick
"I can't believe you're still alive..."
It's a common refrain that Zaff hears, though he doesn't understand why, or much else for that matter. Every time someone who knows the Chiss sees him, they are astonished that he hasn't perished or ended up in an Imperial locker yet. Zaff has two major strengths, though one is as confounding as it is infuriating to his enemies: he is an expert thief able to break into anything, and he just won't die, much to the chagrin of everyone he's stolen from. Numerous bounties are on his head at anyone one time, though it is a regular occurance that one of his benefactors manages to bribe his bounties away in exchange for his skills, though it's usually just a matter of trading one bounty for another within a week. Even more curious, however, is just how stupid the Chiss seems to be. No one can figure out how he manages to lace his boots each morning, much less pull off amazing, if not haphazard and clumsy, heists. Conversations with him just lead to general confusion about everything, and his unwavering friendlyness to anyone, including those in the process of trying to kill him, further adds to the confusion. To date, he has managed to slip out of every bounty hunter's, assassin's, and pissed-off-bar-patron-who's-mother-he-obliviously-insulted's attempt at ending him. He is infuriatingly optimistic, fearless, and confident, though it's theorized that these are because he's too stupid to be any different. In addition to numerous bounties and grudges, he's managed to make a few genuine friends, though they still keep him at arms-length--else they might end up trying to kill him too--and there are about 40 different bars and underground casinos across the galaxy with running bets on when his luck is going to finally run out. His survival has already managed to part many betters with their life fortunes, and those pools of those who stand to benefit from his demise are growing ever smaller.