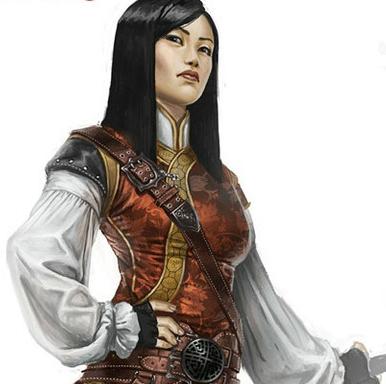 Orchid grew up in the swamps of Gabana to a good-for-nothing family of eight brothers, whom she took to more than her late mother. An isolated planet, Gabana’s many warring clans meant that there was always a need for the art of war.

Wildly inspired by the stories of Bastion, the greatest of the bushi warriors, Orchid wished to join their ranks, but the rest of her family took instead to the traditional business of farming rice, distilling it, and smuggling this illegal liquor across the planet.

When she wasn’t smuggling, she was focusing on becoming just like Bastion. She learned lessons in swordfighting, tracking, and riding - until, in defiance of her family’s criminal ways, she learned that the best warriors fought through charity as well.

Imperial envoys recruited many of the bushi warriors into its ranks as control across her forgotten Mid Rim planet deepened. At the age of 18, Orchid left behind her family’s bootlegging operation and was recruited into the Stormtrooper Corps’ elite Shock Battalion.

Her commander, CT-1516 “Crane” was a grizzled clone trooper veteran who led and inspired her, training together for years. Under Commander Crane, Orchid eagerly helped end civil wars and destroy the many pirate gangs flourishing in the Colonies. She even fell in love with Crane’s protege, Captain Callen.

Everything changed during the invasion of Eox. For every violent uprising she quelled, four more were acts of just civil disobedience. Eox was a brutal warzone, and just days before the fighting ended, her lover Callen was mortally wounded.

Crane was a shell of a man, and Orchid was disgusted with her complicity with the New Order. They retired to Naboo, planning to live out on veterans’ benefits - but Orchid simply couldn’t stay retired forever. She remembers the ideals of the bushi and craves the thrill of a well-executed plan. Whether it’s transport, distilling, or war, Orchid always strives for perfection.

Oath - 10 : Orchid dedicated herself to bring justice to the people that needs it. She needs credits and allies to do so.

Stole her Stormtrooper armor when she defected, but damaged and decorated it to make it clear she is not with the Empire.

1. Take CT-1517 on a quest… or not.
The death of Callen hit Crane very hard. Maybe it’s time to take her mentor out on one last ride, smash some separatists or pirates - for old times’ sake. Or maybe Crane’s just too old.

2. Train a new bushi
The art of swordplay is dead in the galaxy. Find someone else to take on the honorable ways of the sword and shrine.

3. Liberation
Orchid is unsure how many planets really needed the help of the Empire, and how many she helped to oppress. Helping one to throw off its yoke would ease her conscience.