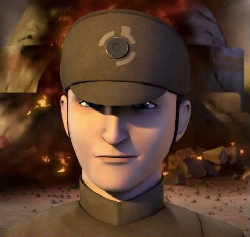 A native of Ord Mantell, Kham does not come from an exceptionally connected or prosperous family. The corruption of the local government and the crime that follows means that making an honest living is not easy.

Looking for a better way and a brighter future Kham decided to apply to the Imperial Academy on Carida. Without any real connections to get a recommendation to the officer course he instead went into the Imperial navy enlistment.

Currently a ships gunnery officer he has been tagged as having the potential for command. He just needs to prove himself and work up the chain of command.

Quest: Influence
Ord Mantell is often associated with corruption and lawlessness. While he does not have the political connections to correct this, Kham hoes climbing the ranks though the military will give him the clout to make changes to his home world.

Political support
The Empire can only work if the Galaxy is united in purpose. Those that would pull that apart must be brought back into the fold one way or another. Carrot or stick, whichever works best.