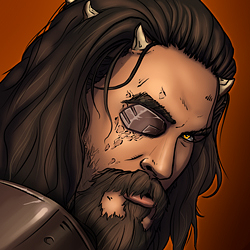 Drogos' was inducted into the Jedi Order in 40 BBY. Taken in at the age of five after being found orphaned on Batonn. Trained in his youth to become a Jedi Knight, Eventually he would be chosen by the order to be one of the many Temple Guards that guarded the Coruscant Jedi Temple. He would serve faithfully the Jedi Order for years until the fateful day when Order 66 was issued. When the Temple was raided by Darth Vader and the Clones almost all of the Temple Guards had fought to the end trying to protect the home of the Jedi,dying valiantly for the Order. Drogos and a few others were given a different option, Join the new empire and the sith and live, and so he did as an Imperial Inquisitor.

Worthy Opponent: The character requires a worthy foe and wan ts to fight against a nemesis worthy of the name.This character seeks to test themselves on the field of battle against multiple opponents or a seasoned Force user. The
challenge has to be worth the character's attention. and they may seek a specific opponent, such as a Sith or the Emperor himself.

Conviction
The character makes quick decisions
and sees them through without hesitating. Believing in personal action and the ability to achieve one's goals, this character never gives up on a task.
&
Obstinacy
Once this character has become determined about something or formed an opinion. no one can dissuade or reason with them, This character believes that to change one's mind or one's cause is to show weakness, even if a
situation has altered or become hopeless.

Identify and eliminate force-sensitives not in direct service to the Empire.

Racial Bonus
Add one Advantage to all Coercion