Edge of the Empire
1
Soak
Wounds 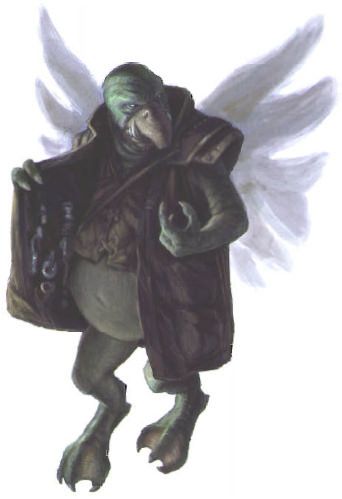 Zenik was a person of some importance on Toydaria before it all went wrong. Now, faced with debts on multiple fronts, he has to find a way to turn a profit fast enough to stay ahead of the debt collectors and, more specifically, their muscle. He has a beat-up ship, a small amount of cargo, and a miserable but handy droid keeping what's left from falling apart.

Ambition - Status
Zenik would love to restore his reputation on Toydaria and earn his way back onto the social echelon that he had previously resided on or maybe even higher!
Cause - Capitalism
Zenik has always had a love of capitalism, as he's always been a person of means that benefits from a capitalist system. That love has been shaken due to recent events, but Zenik still believes that while capitalism and greed were the cause of his current situation, it will also be the cause of his return to a person of status.
Relationship - Droid Companion
Zenik has developed quite the fondness for his Droid companion, BLX-OM ("Ohm") since they started working together. They've gotten each other out of some tight spots in that short time.

10 Pt - Sponsorship (A generous benefactor has supplied Zenik with his current ship (and Droid) for reasons even Zenik can't figure out. They have given Zenik a bit of time to start returning with a cut of profits, but not too much time).
10 Pt - Debt (After a botched business deal, Zenik owes a sizable sum to a Toydarian business group which he has discovered is a front for a fairly important Hutt, who doesn't like losing money).

Zenik looks a lot like many Toydarians, but dresses well and keeps himself well-groomed so he can impress in business dealing. His one distinguishing feature are his unusually large feet (at least for someone the size of a Toydarian), which he likes to point out when describing whatever other body part he needs people to believe is also large (including brain and genitals). While he can be crass and abrasive at times, he also knows when he needs to be a professional and put his best (large) foot forward to close a deal.