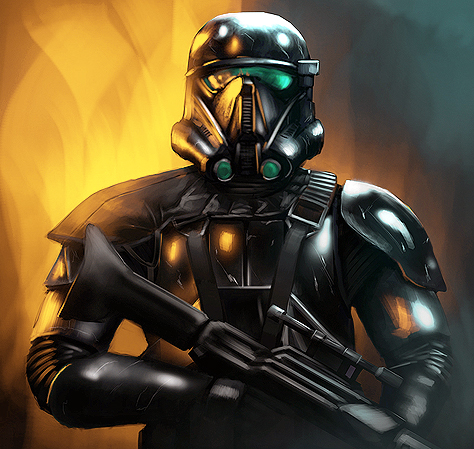 When making an Athletics check, the Force user may roll an Enhance power check as part of the pool.
The user may spend light/dark to gain success or advantage (user's choice) on the check.

DT-777 was born a Mandalorian during the early days of the clone wars and witnessed first hand two civil wars. With the coming of the empire, he was drafted from the Imperial Academy on Mandalore and placed into the Death Trooper Program, one of the first of his kind. With his solid Mandalorian upbringing and enhanced Death Trooper training.

The Empire noticed a knack in him. Hightened agility, reactions, awarness.... Something more to him than your typical Mandalorian. Something they needed to keep a close eye on. So they turned him into a Death Trooper and assigned him to Jackal Squad, a squad in the service of the Inquisition.

Growth -
He seeks Power, and will stop at nothing until his might grows ever onward.

A Mandalorian is a Conqueror. DT-777 is the Emperor's blade. Through force of skill and might he will crush any who stand against the empire.