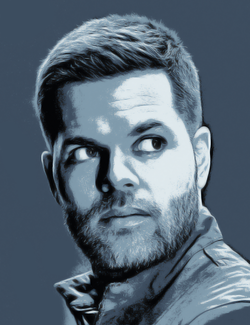 Hyde is a child of the slums of Coruscant that had relied on his strength and skills to survive in a galaxy that isn't kind to the weak. As soon as he could handle a blaster, he started working as a hired gun, and has found both success and accomplishment in his work, even if it often leaves him at odds with those of his past.

Expertise: When hired guns are as commonplace as twi'lek performers, and in some cases more so, Hyde knows he has to do the work to put himself ahead of the normal rabble and garner himself the best, and most importantly highest-paying, opportunities for work. If he's not cleaning and maintaining his gear, he's constantly studying up on tactical strategy or performing drills to keep himself in tip-top form.

[10-Required] Dutybound: When Hyde takes on a contract, he will stop at nothing to fulfill that contract. Currently, that contract rests with the owners of the VM-83; a vessel and crew he's been tasked with providing security for. He is committed to not only seeing the venture prove worthwhile to appease his employers, but also to make sure the entire crew makes it back out alive with their prize safely secured in the hold.
[5-1000c] Debt: Hyde owes an old friend of his a debt, specifically one for his life. Hyde wasn't 'free' when he was born, but had his freedom bought by this friend that navigated the nature of the slums of Coruscant in such a way as to garner him enough wealth and influence to purchase Hyde's freedom. As such, Hyde always knows that at any time, during any job, his marker may be called in and he'd have to make a decision to settle his debt or risk a grave fate for disobeying the obligation of it.
[5-Increase Bonus Credits to 2500] Family: Unbeknowst to his half-sister, Hyde is always checking in on her through mutual friends when he gets the chance and has been squirreling away credits for years in the hope of giving back something for all of the years she watched over him when he was a child. While he knows she could take care of herself perfectly fine, that hasn't stopped him from pulling strings and calling on contacts whenever he gets the slightest hint of trouble heading her way. If she were to ever find out her 'little brother' was doing these things for her, she might never forgive him for overstepping and treating her like she wasn't his superior, even if the galaxy doesn't see has as such.

Hyde is a relatively broad and muscularly fit human that can easily be seen as imposing even though he's no taller than the average human. He keeps his light brown hair tactically short, and also has come to appreciate the proper beard he grew into over the years. Besides that, even down to his clothing, he's relatively unremarkable in comparison to most of the galaxy. This had aided him well in being able to move about without drawing undue attention, unless, of course, someone is looking for him in particular, and then he's hard to miss.

While having a blaster pistol on your hip isn't all that uncommon in the Outer Rim, Hyde does enjoy having the security of having a blaster rifle slung over his back, even if the weapon tends to draw attention, especially from those unnerved by such explicit indicators of the kind of life he leads.