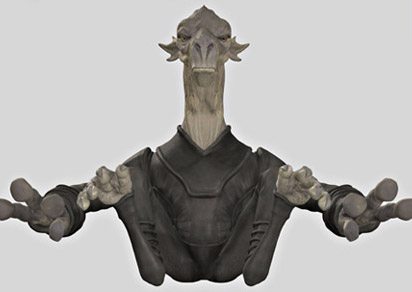 Like most Dugs on Malastare, Docratha grew up in one of the arboreal cities on the Eastern Continent. He grew up repairing podracers in one of his clan's repair shops. Docratha exhibited a knack for getting engines running faster than should be possible. He had ties to a resistance movement, which originally struck against their Gran oppressors. He would patch their speeders, and modify their equipment.

Unfortunately, the open access to his shop backfired when some of the more militaristic members of the group sabotaged the magnetic tethers on a podracer he had modified. One of the engines flew into the stands, killing and injuring many Gran spectators, while the other smashed into an imperial transport, causing it to crash. In the ensuing investigation, the authorities were quick to pin blame on Docratha, and he would have been incarcerated or executed were it not for a friend who spirited him offworld. His friend introduced him to his employer Mi'kirm, and he is working hard at repaying his debt, while dreaming of the day he can prove his relative innocence and return to his homeworld.

Forensic Reconstruction: Unable to return to his homeworld, Docrata set his sights for the stars. He hopes someday to be prove the truth and clear his name of the crime he is accused of.

He hopes to someday open his own salvage and recovery business. In the meantime, he works to ensure that his team's equipment and ship run flawlessly, while constantly tweaking and upgrading both.

5 Obligation Criminal- Docratha has been exiled from Malastare for his crimes, real or imagined against the ruling Gran bureaucracy and occupying imperial forces.

5 Obligation Favor- Docratha owes his life to his Besalisk friend Goren, who rescued him from the authorities on Malastare.

10 Obligation Debt. The Sakiyan “business woman” Mi’kirm Donal currently holds a debt over Docratha and company for the cost of their modified YT-1300 freighter.

Docratha is a grey Dug about 1 meter tall. He is blunt and sarcastic in his speech, with little use for pleasantries. He has no love for imperials, but truly hates Gran of all shapes and sizes.

Contacts:
Goren - Basilisk Smuggler. A green 2 meter tall Basalisk with a jovial personality which belies his underworld connections. Saw enough potential in Docratha after he repaired and modified his ship that he gave him passage off of Malastare when the authorities came for the Dug.

Morowa- Dug Revolutionary. Docratha's younger brother and clanmate. Has deep ties to the Dug revolutionary movement. Looks up to Docratha. Unknown to Docratha, somehow connected to the sabotage that exiled Docratha.