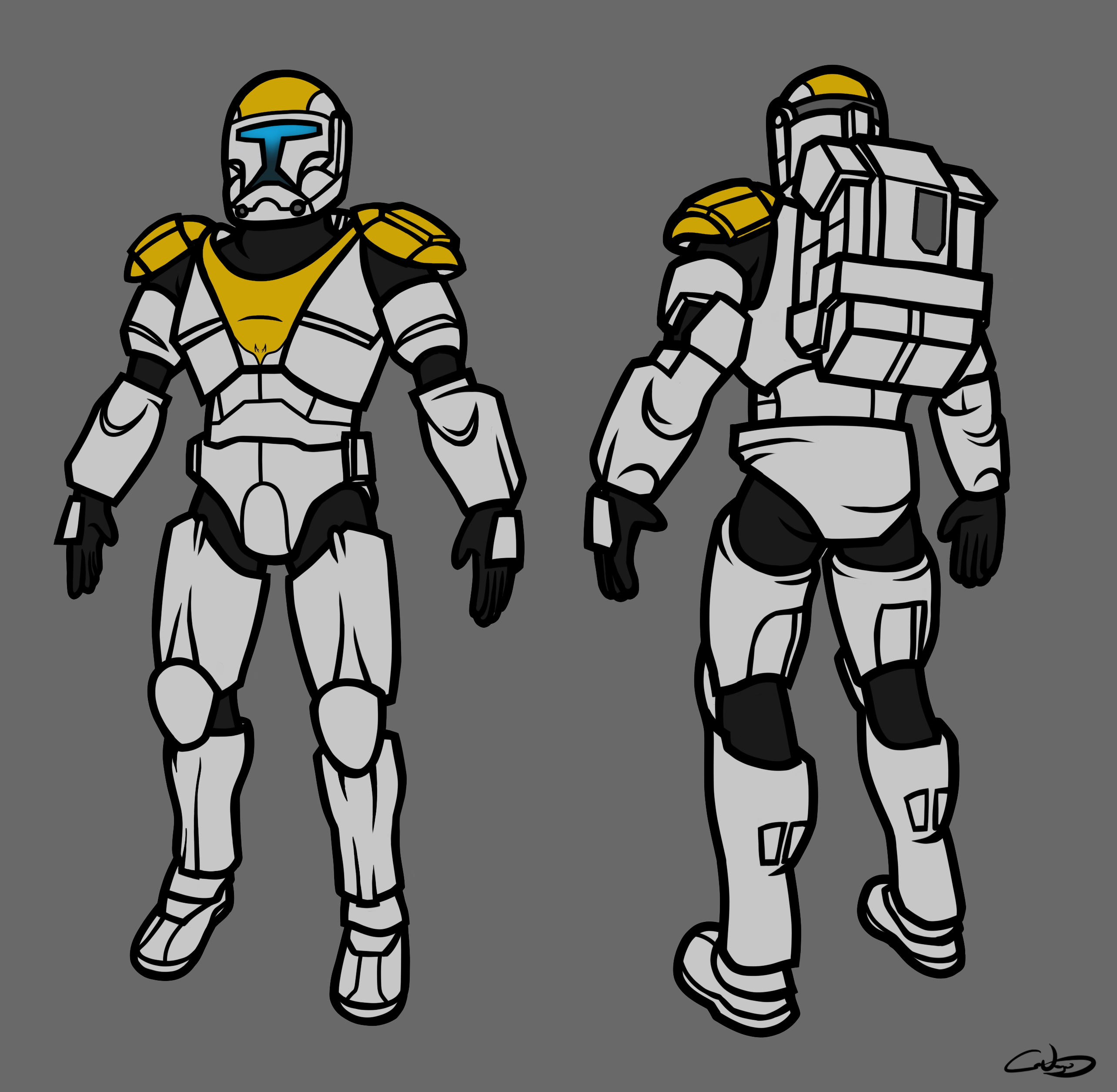 DC-17m (0/3) The character may swap the weapon between modes as a Maneuver. When in Sniper Mode, add 2 Setback if using at Engaged or Short range.

His history began much like any other clone, selected before he was two-years decanted for clone pilot training, and then abruptly shifted into commando cross-training before another three years had passed.

The cross-training program was led by Teuro Jihira, a mercenary dropship pilot and ace starfighter jockey who'd fought in combats from the Tharin Piracy Pacification to the Cheelin Suppression, each time acquitting himself well and earning plaudits from the governments who hired him. Each time, he refused the awards.

His experience as a dropship pilot in the Cheelin Suppression, where dozens of gunships were grounded after disgorging their troops, leaving the pilots a liability, led him to establish a doctrine of dismount fighting.

Hawk learned this doctrine in painful detail, the grueling training regimen reinforcing his existing acumen for piloting and gunnery while giving him enhanced training in combat more generally and searing the tactics of a commando team into his brain.

Teuro didn't leave it at that, however. A classically-raised Mandalorian, he educated them in philosophy and Mandalorian life as he would his own sons, all with his characteristic bluntness and prodding questions.

While some of the clones took little interest in the philosophy, Hawk ate it up. He took the questions to heart, and set about answering them. If he couldn't, he let them stew. Questions need answers, and some answers need the questions asked.

The biggest one, posed by his sergeant, was "Why fight for the Republic?" He didn't elaborate further, and refused to answer any of their comments. For his part, Hawk wasn't able to answer it, not in a way that satisfied him.

While enjoying some well-deserved rest after graduating from the program, he stewed over the question. Finally, it clicked. It was a trick question. Teuro didn't fight for the governments who hired him, and he wasn't working for the Republic now. No, he fought for his comrades, his vode, his fellows in blood and toil; he fought for his honor, his professional pride, his passion; he fought to save lives, didn't he? The governments of Cheelit, or Montitia, or whoever else he fought for, were only the beneficiaries.

It was a liberating feeling.

Hawk didn't think so. He would still fight for the Republic, and he would give it his all. Kyr'am jaon trattok.
(Death over failure)

No, life has value. As much as they have tried to convince me otherwise, I know it's true. It's something that must be unlearned, never taught. The only question is whose. Does my enemy's life have value? To him, yes, and to others.

If life has value, value comes from somewhere. To have value, it must be valued by something external. Who values our lives? We value our lives. My brother beside me, and the brother beside him.

Quest: Reason
To make sense of the senseless is a daunting task. To find reason for the reasonless is a lost cause. When reason sleeps, monsters rise. If the monsters have risen, reason must awaken and restore order. But what order?

Though such existential consideration may be counter-productive for cannon fodder, it is essential for a man.

(-5=5XP)
Personnel (0):
Insert, cover, extract—that's the motto of the commando pilot corps, and that's my job. Each brother is my charge, my cargo, and my comrade. I will take them in, I will protect them, and I will bring them out. No brother will be left behind, no matter the cost to myself.

Age: 20 (biologically; chronologically: 10)
Height: 6'0
Build: Muscular
Hair: Black, left rather messy
Eyes: Brown
Homeworld: Kamino
Armor: The helmet features a yellow cap in a similar design to that of clone pilots, as a nod to his other airborne brothers, and his shoulder plates are likewise painted yellow. A yellow triangle angles down across his chest from each shoulder, terminating in a stylized hawk's head, an image of a diving bird of prey. The rest of his armor is the standard white paint scheme, albeit already pocked and scarred after years of training.

Whenever he has some downtime, whether it's in the cockpit of a gunship waiting to set off on a mission or in his bunk after returning to a carrier, he will often pull out his datapad and either start taking notes on some matter or read up on whatever philosophical materials he can get his hands on, whether technically contraband or not.