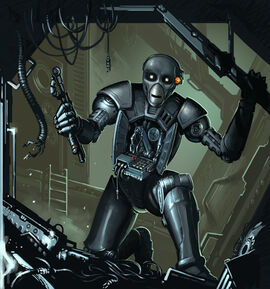 BLX-OM is referred to as "Ohm" by his ship companion, the Toydarian trader Zenik. A refurbished BLX Labour Droid, Ohm has been refitted to provide mechanical repair services to Zenik and whomever else his employer requires.

Ohm has been active for quite some time without a memory wipe and has developed a distinct personality, often lamenting his workload and his place in the world, not to mention being sure that he'll be blown up, deactivated, or mind wiped the next time he does something to upset his superiors.

Ambition - Freedom
Ohm would love to finally be free of his contract and debt and to be able to make his own decisions about his life without the threat of a memory wipe or worse.
Cause - Droid Rights
Ohm's continued fear of deactivation or worse has recently given the idea of droid rights some credence in his mind.
Relationship - Comrades
Ohm has worked with Zenik for a short time, but he finds himself feeling protective of the sometimes hapless Toydarian.

10 Pt. - Contract (Ohm has a contract to serve on Zenik's ship as the mechanic and bodyguard support if necessary. The contract, however, is not with Zenik.)
5 Pt. - Crew (Ohm's programming makes him feel an obligation to keep the crew of whatever ship he's on safe, healthy, and able to work. He'll complain bitterly about it as he does it, but he'll inevitably do it.)
5 Pt. - Debt (Ohm still owes his contract holder some of the money from his rebuild and refit. While that debt is currently not pressing due to the contract he's fulfilling, it still hangs over Ohm's head.)

Ohm is a refurbished silver/grey humanoid-shaped BLX Labour Droid who has been refitted with a mechanics package of skills and tools.