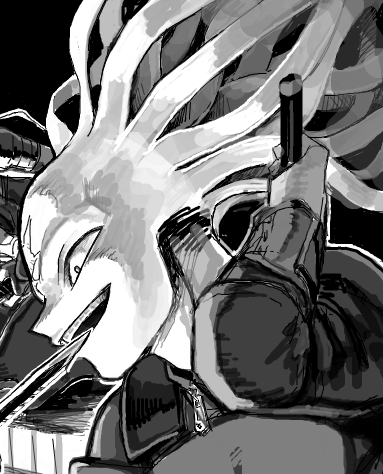 Dakash was born on the agriworld of Abrion Major. She spent her childhood living with her parents on their moisture farm until an old friend of her father's, a man called Holda Mosta, arrived and tried to recruit her father back to his crew. After he refused to come along, Holda killed Dakash's parents and brought her into his crew, training her up to take her father's place as the crew's tracker and sniper.

As the years went by and the shipping contracts dried up for Holda's crew, Dakash split from them, seeking new contracts and thrills, becoming a bounty hunter for hire and keeping to the code.

With shipping becoming more and more difficult for independent businessmen to attempt under the Empire, Holda began taking more and more smuggling contracts, putting him on the Imperial radar and earning him a bounty. Seeing the bounty on her former mentor, Dakash took it, hunting Holda down and killing most of his crew, but failing to kill the captain himself, having to retreat while injured. Knowing that Holda had connections, Dakash went underground, hopping from planet to planet in the hopes of avoiding any retribution from Holda. . .

* Relationship: Pet
The character is close with a pet or animal companion of some sort, a relatively small non-combatant.

Obligation: 10
* Thrill Seeker (5)
Dakash selects her targets and jobs more on the potential thrills she can get from them. It was this flaw that led to her betraying her old mentor due to a bounty on the heads of his crew despite not having the skills to fully complete the job.

* Betrayal (5)
Dakash betrayed her former mentor and adoptive father, Holda Mosta, after a contract came up on his head. Despite knowing she couldn't fully complete this contract, Dakash took it and attempted to bring Holda in, failing in a shootout that led to the majority of his crew being taken out. It was due to this failure that Dakash had to cut her previous ties and headed to the world of Oogway to try and start a new life.