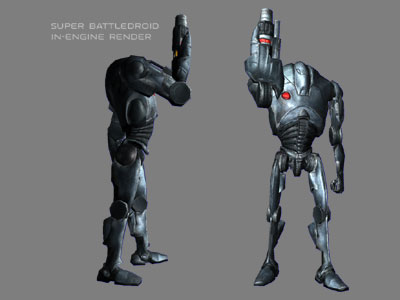 The last few B2's were mothballed decades ago... Until a somewhat paranoid junker in Nar Shadaar reasoned that he needed to make his own friends. Desperate for any hired muscle he could lay his hands on, and with only his tool shop to stop the assorted Hutt heavies kicking the door down, Ju'r G'neaf set about building his own army...

The first exploded, the second expressed a disturbing desire to kill it's owner, the third yelled "fuck this noise!" and ran out out the door.

Or turn him in to the hutts for some credits after shooting him in both kneecaps.

Moral of the story, if you're going to build yourself a droid army, make sure you build some restraining bolts first.

H4L has been a hired gun for the Hutts since, doing mostly mercenary work where the subtle touch is not what is required. The Hutts now have what are essentially conventional military forces and H4L did most of his work for these.

The big change finally came when he was sent to terminate a Gank named Marsten. It wasn't so much that the Gank saved him, but his realisation that he had been lying to himself about how independent he really was. He now tags along with the smuggler, where life is definitely more interesting, but his true freedom is closer within his grasp.

H4L understands what he is, a relic. A collection of dozens of other robot parts coelsced into one killing machine with an attitude problem. His beleives he is the sum of several other parts from a bygone age when droids were more than they are now. He comes from a time when a droid could be free. He owes it to his originators to fight for his own independance and resist the hateful grip of the restraining bolt. He also feels that each part of him that needs replacing or removal is another piece of his essence that is being whittled away. He is extremely cautious of adding any piece to his patch-work quilt of a form that has not already been part of another droid.

5-Criminal: It's very easy to do something illegal in the new shiny galaxy that vader and his spawn have made. It's even easier to just BE illegal, something that the Empire has decided, for whatever reason, cannot exist in the new galactic Empire. H4L is one of those things.

Obligation: H4L owes a lot to the smuggler Marsten, who resisted the urge to blast him when he was left a half wrecked bolt-pile in a pool of oil. He's commited himself to staying with the silly slushpile while he figures out what exactly it means to be free. Marsten seems to understand it well enough, so maybe it will rub off on him.