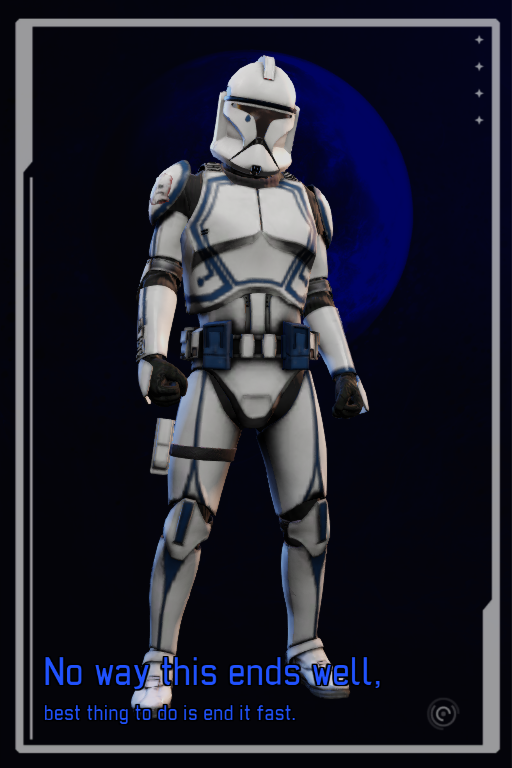 Like all clone troopers, CT-8275 was decanted on Kamino. He was raised through the daily (and sometimes nightly) ritual of flash-training, lectures from Cuy'val Dar, and live-fire exercises. He excelled in marksmanship, and due to his pessimistic demeanor, he received the nickname "Driz" as a derivative of drizzle.
Once he got out in the wider galaxy, he started to become somewhat disillusioned, knowing he wanted something outside the GAR one day, but not fully understanding what or why. As he began thinking about this more, he became perpetually gloomy. He eventually tried to cut himself off from these thoughts by trying to convince himself that he doesn't and fully committing himself to the orders and regulations that dictate daily life in the GAR.

Ambition: Something More
As much as he won't admit it to himself, he wants something outside the GAR one day. Because he knows it won't end well, he tries to convince himself that he doesn't. And so:

Belief: Good Soldiers Follow Orders
He clings to orders and regulations, letting them define him and give him purpose, allowing him to lose himself in something greater by becoming part of a machine.

(-5=5 XP)
Personnel (7):
We're all gonna die sooner or later in this war (probably sooner), but we may as well drag out our misery as long as we can. So no stupid risks, okay? If there's going to- ah, nevermind.
On a lighter note, if we're born to die we may as well go out doing something useful. The civvies have families and lives, preserving those seems like a worthwhile goal. In the unlikely event we win this shabla war, what's the point if there isn't anyone around to enjoy it?

Pretty much like all other clones, though he keeps his hair cut a bit shorter.