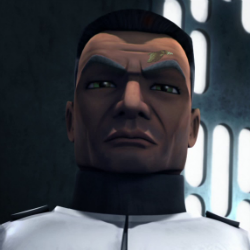 CC-8968, better known as "Dagbat" (derived from the name of a small flying avian creature on some backwater swamp world) to his brothers and close allies, was trained as a member of the GAR Navy's starfighter branch. Trained on the early in the use of the LAAT gunships and their variants, he has since qualified in the use of a number of other smaller spacecraft and land vehicles. After showing aptitude in leadership skills, he was placed on the officer track among the pilot ranks.

Most recently, he has seen his 'graduation' from the Kamino training facilities and has been delivered, along with many of his brothers, to the 7th Systems Army where he awaits his assignment.

Motivation - The Republic & the Grand Army

For the entirety of his (admittedly short) life, and some might even say from before leaving his birthing pod, 8968 has been instilled with the heart-felt belief that the Republic represents the very best of the galaxy. Depsite it's flaws, and in spite of the gluttonous bureaucrats that issue the orders from Coruscant, the Republic is the only hope for the future of the galaxy's citizens.

And his fellow soldiers in the Grand Army, his brothers in every sense, are the only thing he knows that he can rely on, and they can rely on him. From the insertion, to the air support, to the extraction, he would give his life for them or the mission.

Space Superiority - 30
The troopers of the infantry battalions may be the backbone of the GAR, but 8968 knows that without constant space and air superiority there's no chance of victory.

Like every other clone in the Grand Army, 8968 looks nearly identical to every other one of the hundreds of thousands of his brothers serving the Republic. He keeps his dark hair in a standard, short cut. The only distinguishing features of 8968 are his green eyes, which stand out from from the normal brown, and the tattoo of his namesake, the dagbat, on his forehead over his left eye.