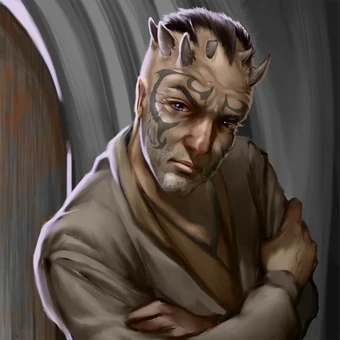 The user may spend a Force Point to heal a number of wounds equal to his Intellect on one engaged living creature (including himself). This counts as a use of a stimpack on the affected target. This means a single target may only benefit from five uses of Heal over a twenty-four-hour period, and his uses of Heal also count against the limit on uses of stimpacks (and vice versa). The user may not activate this multiple times.

The user may spend a Force Point to inflict a number of wounds (ignoring Soak) equal to the Force user's Intellect on one engaged living creature. The user gains 1 Conflict. The user may not activate this multiple times.

Ares Terrik was born on Onderon in 27 BBY to Jax and Lahani Terrik. Jax was a policeman in Iziz's law enforcement. Dissatisfied with the Republic, Ares' parents were pleased when the world sided with the Separatists under the rule of King Rash.

Midway through the war, Saw Gerrera and his sister Steela Gerrera began waging a guerilla war against the Separatist droids, showing disregard for the safety of the populace. Jax was assigned to the counter-terrorism task force charged with rooting out their activity, through which he discovered that the Jedi were arming and backing the rebels, a discovery that only further fueled his distrust and dislike of the Jedi.

Naturally, Ares came to share his parent's political affiliations and beliefs including their dislike of the Republic and hatred for the Jedi.

When the Empire came to power and ended the Clone Wars, Jax was surprised to learn that the Empire had purged the Jedi. Though he thought it a turn for the better, he still distrusted and disliked both the new "Emperor" Palpatine and the Empire as a whole.

Jax continued on in his job within Iziz Law Enforcement, and shortly after the end of the Clone Wars the Empire tapped the local police to investigate an enclave of Force users believed to be hiding out in the city. When they discovered the enclave and raided it, a couple of his comrades were killed by the Force users, further cementing his disgust for the Jedi and other Force users, who he believed were a threat to society.

About this time, Saw Gerrera's Onderon Resistance reformed itself as Saw's Partisans and began to resist the Empire, carrying out multiple attacks.
Even though his father saw them as terrorists carrying out the same destructive actions they always had, Ares saw them as now the enemies of his enemy: the Empire.
He still disapproved of their methods, however, seeing them as too extreme.

Even after Saw's Partisans moved offworld, there were still many groups inspired by his actions to take up arms against the Empire.
One evening in 11 BBY, one of these groups ambushed an Imperial patrol that was passing by the family's house. Lahani was outside at the time, and immediately ran to try and get into the house. As she reached the doorway, she was hit in the back by a stray bolt and fell into the house. Ares dragged her into the house and began desperately trying to stop the bleeding, but the wound was large and he didn't have the training or the equipment to do much about it. As he felt a sob rising in his throat, he suddenly felt a warmth in his hand and a feeling almost like something flowing through his hand and into the wound. The wound had just started to slowly close when he heard a loud explosion and the windows all exploded, a fireball roaring through the windows and into the house. A fire bomb had exploded outside, and now the entire front of the house was on fire. The flames had caught on the interior too, and the fire was spreading. He turned his attention back to his mother, desperately trying to summon that power again. He was able to get small flashes of it, but not enough to save his mother. He knew if he didn't leave now, he would die too. Giving up, he ran out of the house and took cover nearby.

The firefighters couldn't come until the area was secure, and by that time there wasn't much to save. His home had burned down, as had the two next to it. His mother was dead, and everything was destroyed.

As he and his father tried to pick up the pieces of their life, Ares had to hide his power, fearing that his father would see him as one of the hated Force users, for Ares recognized his abilities for what they were: the Force.
He came to terms with this new reality and saw it as an opportunity: He would become a doctor and learn how to more effectively use his power.

However, with the catastrophe that had befallen their family, it was far beyond their financial capabilities. Ares decided that the best way to pursue his dream would be to learn more about his powers instead. To this end, he decided to get a job on a freighter, picking up rumors and information in cantinas in spaceports across the galaxy.

Ambition: Power
Ambition: Freedom
Ares is pushed by a lust for power; a desire to control and advance his abilities in order to control his surroundings. This motivation stems from the guilt he felt after his mother died, knowing that if he'd just been more skilled and powerful she would've been saved. Additionally, Ares hopes for freedom, mostly for himself, but also for people like him that wield powers.

Conflict:
Morality: 50 (+5XP, +1,000 credits)
Emotional Strength/Weakness:
Ambition/Greed: Ares knows and is ready to work for what he wants, and with a strong sense of determination, he's focused on his goals. However, sometimes he takes it too far, and his desires become more selfish than merely ambitious. Though he generally doesn't struggle with greed, it's something he can't easily resist.