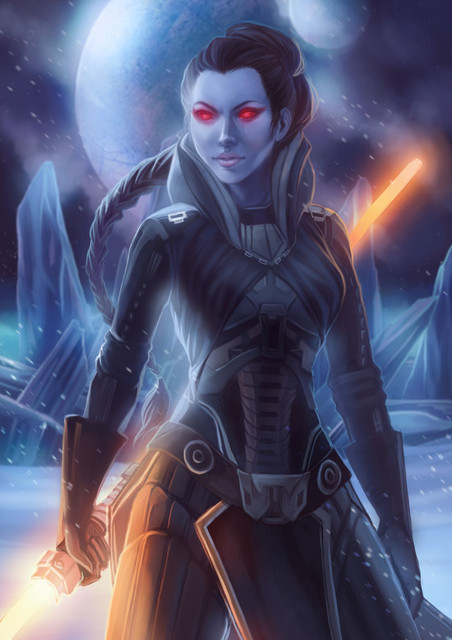 The Force user creates illusions to fool those around him. The user may spend a Force point to make a target up to short range unable to perceive a chosen person or object of silhouette 1 or smaller. Until the beginning of the user's next turn, the target cannot see or sense the hidden person or object.

Ners'yre'nlusu parents left Csilla before she was born. Her mother was an ambassador, and they settled on Ord Mantell. Due to circumstances Ners'yre'nlusu does not recall, her parents disappeared, and she was left to fend for herself. She learned how to gather information, and assisted a few Republic spies in her young age. One in particular noticed her almost supernatural ability to gather information, and correctly suspected that she would make a valued member of the Jedi Order.

Now going by her core name, Syren, she quickly passed the trials and was inducted into the order of the Jedi Shadows. She used her upbringing in gathering information to become a formost spy for the Jedi Order.

When war broke out on Geonosis, Syren had already been undercover with Separatist leadership for six months. Cut off from communication with the Jedi Order, she had to fend for herself. When the Jedi came in force to Geonosis, she saw the opportunity to return home and took it. She now uses her skills on the front lines of the Clone Wars.

Infravision: You can remove up to 1 Setback dice added to checks by lighting conditions.