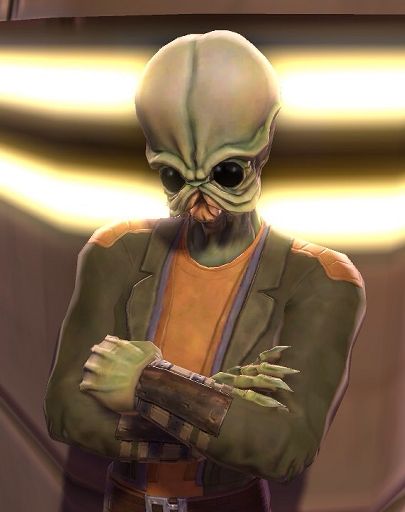 Heavy Blaster Pistol, (2 enc, 1/3HP)
- Optimised Energy Cell (When the GM would spend Despair or Threat to cause the weapon to run out of ammo, it requires an additional Threat to have the effect apply to this weapon).

Collar-Amp (0 enc, allows user to be heard at Long/Extreme range (depending on conditions), paid the extra 100 credits so it can hook into a sound system) - p. 45 Far Horizons.

Military Field Manual (1 Enc, once per scene, info from the manual may provide a boost dice to any task at GM's discretion) - p. 198 AoR Core.

Insider's Guide - Region TBD (0 Enc, A character using an Insider's Guide adds an automatic Advantage to any check to find a specific location or service within the region the guide covers) - p. 52 Desperate Allies.

Modular Backpack Frame - p. 55 Forged in Battle.
- Comms Unit (2 Enc, Functions as a comms hub, routing communications up to Long range Planetary scale. Adds 2 setback dice to attempts to unscramble the signal).
- Power Unit (2 Enc, as an action can charge a depleted piece of equipment, or a droid/larger piece of equipment in 2 hours. Once per encounter, allows the wearer to ignore the Out-of-Ammo result in the same manner as an extra reload).

Thall's parents were travelling musicians, travelling from planet to planet across the Outer-Rim. As such, Thall was born among the stars - on the way from one planet to the next. He's never had a place to settle down and call his own.

His parents were intensely political, and they brought that to their music - often stating what was the point of their music if they could not also make their audience feel something for the galaxy around them. This sentiment made them popular during the Clone Wars, where their pro-Republic anthems were co-opted into propaganda. However, with the rise of Emperor Palpatine's New Order, their outspokenness would get them into trouble.

They created some somewhat mocking songs criticising the Empire, it's restrictions on freedoms and it's military industrial complex. Unfortunately for them, it was not long before agents of the Empire tracked them down and executed them.

Since then Thall has been an angry cynical loner who wants nothing more than to burn the Empire down. He thought that joining the fledgling Rebel Alliance [or other appropriate movement] would be his path to doing that. Unfortunately his commanders have only seen fit to put his skills to use in cargo holds - cataloguing supplies and ensuring their efficient use. Thall, however, longs for more - he wants to go out on missions that "actually matter", missions that hurt the Empire, missions that would allow him to become a real hero of the Rebellion.

Ignore most of the above. Going to work in the following details with my character's personal history (e.g. details on parents are probably still the same).

- Worked for a shipping company at the starport on ORD Mantell, but wanted to actually work on ships to see the galaxy. Stuck moving boxes, etc. Didn't like this job. Lost job due to Imperial xenophobia (the company took Imperial contracts)/angering an Imperial officer.
- I believe he got me fired (probably in the last week as the campaign begins).
- Heard of resistance cells on the planet, but doesn't really know how to go about joining a cell.
- Got in contact with some resistance members (at least I think they're resistance members), but told to essentially bide my time and wait.
- Has some family on ORD Mantell - an uncle runs a junk dealer's shop in the city.

Starting Location - Uncle's junk shop - run down area of the city on the outskirts.

Glory: The Player Character sees an incredible chance to do something hugely important in the galaxy, securing his place in history alongside other great heroes. He wants to fight in the biggest battles and do something so outrageous and daring that folks will talk about it for centuries. Such motivation can be dangerous for the PC's companions , yet it may also serve to inspire others.

Operational Planning sounds like this character in my head to a tee, just not sure how to integrate it into how I'd play yet:

Efficient use of resources is a key to the success of the Rebel Alliance. Rebel strikes must be carefully organized to be as effective as possible, while consuming minimal supplies. The Rebellion can tolerate few losses. The PC recognizes this and takes it upon himself to ensure that each mission is engineered for success, with nothing forgotten or wasted.

So in terms of planning - come up with a plan for whatever mission we're going on. Try to make sure we don't waste any resources too.

Then maybe go into Scientist or Propagandist depending on how I want to focus things. Thinking more of a talk-ish angle, so maybe Ambassador. Maybe eventually Quartermaster as that would have been his role.

However, may want to consider the Recruit tree - seems like it'd be useful for this character as he develops.